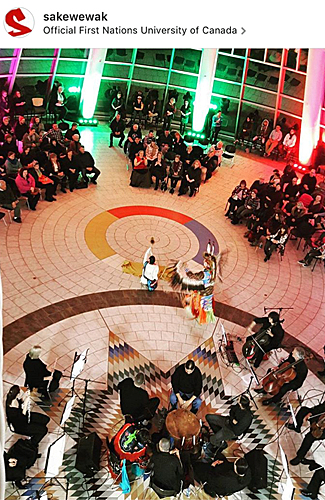 Orchestral Powwow brought together a drum group, powwow dancers, an RSO ensemble, and singers in performance at the end of the 2017 Sâkêwêwak Storytellers Festival. Orchestral Powwow is a collection of chamber symphonic works composed around Powwow pieces by Canadian cellist Cris Derksen. She characterizes them as “bringing our Aboriginal music to the centre of the European model and we as aboriginal artists lead the way with our drums and our heartbeat to create new forms of music.”

Orchestral Powwow is both a musical performance project and a symbol of Canadian multiculturalism. It created unprecedented artistic genres and opportunities for community engagement. For Cris, the project “responds to a perceived need to truly incorporate Aboriginal artists in art that claims Aboriginal credit.” She spent a year composing and transcribing with a library of powwow albums to create a new, extremely powerful, genre of music.

Cris told CBC news: “It was a way for me to reconcile who I am as a classically-trained colonial Indigenous human. It’s something you’ve never heard before. We take that white man conductor telling you what to do completely out of the scenario and instead of having a conductor, we follow the heartbeat of the Indigenous drum.”**

Dancer Teddy Bison spoke to CBC news about the process of collaboration: “Now that we are making it a reality, it’s exciting. It’s different because the timing’s different … men’s fancy dance is a very aggressive dance and a lot of the music that we have been practicing to gives a softer feeling. That was my biggest challenge, to soften things up.”**

The Regina performance of Orchestral Powwow was successful on several levels: as a collaborative performance project, as a celebration of multiculturalism, and as innovation in arts/culture. It is an example upon which similar work can be built. Multiculturalism in a modern society amounts not only to acknowledging our diversity, and celebrating uniqueness, but also uniting differences in such a way that allows us to move forward together in cohesiveness, creating better communities together.

Innovation, particularly through arts and culture, seeks to find new ways for communities to move forward together, propelled by intercultural understanding, and collaboration for the betterment of all.

Cris has recently released the finished recording of Orchestral Powwow, originally conceived by herself, and Robert Todd of the Tribal Spirit Powwow label. 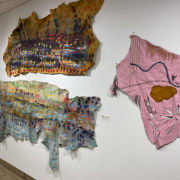 How is the World Different because your organization exists? – Sâkêwêwak Artists’ Collective Inc.

2010 Arts Congress: State of the Arts