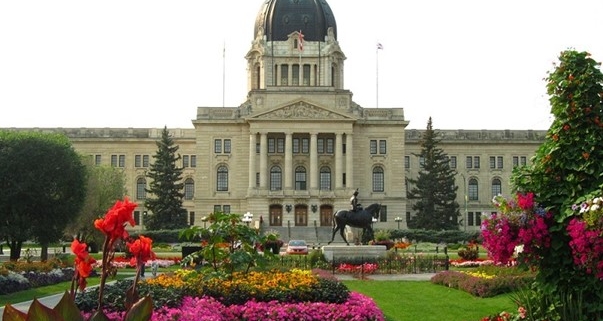 This year’s budget brings mixed news – status quo funding to the majority of the arts sector but an $8 million increase for the Creative Saskatchewan Production Grant Program for film and television, bringing the total funds available to $10 million. The SAA is hopeful that the film and television industry will be able to rebuild and quickly take advantage of this funding to effectively demonstrate the economic impact film and television have on the province’s economy in this first year to encourage renewal in future years.

The current government is estimating Saskatchewan will see $50 million of new investment in film and television production, as well as economic activity across the province. This will increase spending in sectors like the hospitality industry, which has been hard hit by the pandemic.

There will be little relief for the arts with mostly status quo funding and an added PST to admission and entertainment (effective October 11, 2022). Examples of the types of charges, currently exempt but will become taxable include, but are not limited to: admissions to concerts and shows, movie theatres, museums, historical sites; admissions to fairs, arts and crafts shows; professional theatre tickets and subscriptions; and memberships.

Accessibility to the arts is important to the well-being of Saskatchewan people. The arts have an impact on Saskatchewanians beyond its entertainment value; they improve well-being and develop a sense of inclusion in communities. Research studying the linkage between arts participation and well-being shows particularly strong results for health, mental health and satisfaction with life – all top of mind at the moment.

SAA President Daniel Parr had this to say in response to the budget: “In these times of fiscal restraint, it’s encouraging to see the increased investment in the film sector – a sector that was deemed permanently lost – but the pandemic has hit all sectors hard and in order for the province to be ‘Saskatchewan Strong,’ significant investment in all the arts is required for economic recovery.”

SAA was disappointed to see that funding to SK Arts and most other areas within the arts remains the same. Parr continued, “Status quo funding to organizations such as SK Arts, taking into account the rising cost of living and record-breaking inflation, amounts to a decrease that puts significant pressure on the arts sector to meet its increasing obligations and stifles growth. Such funding will also result in less granting money to the arts and thus less art for the people of Saskatchewan.

“Factor in the increased cost for the public of participating in the arts due to the addition of PST on expenses such as concert tickets and art gallery attendance, the prospects of artists and arts spaces “building back” capacity is further hindered.

“That being said, the fact that funding for Creative Saskatchewan was increased and that funding for the arts was retained in these difficult times gives us a tentative hope in the government’s understanding of the importance of the arts to the province’s overall well-being and pandemic recovery. We hope that as the deficit continues to drop investments in the arts in future budgets can continue to increase.”

Following are excerpts from the Parks, Culture, and Sport section of the 2022-23-Estimates. Links to other budget documents can be found here. 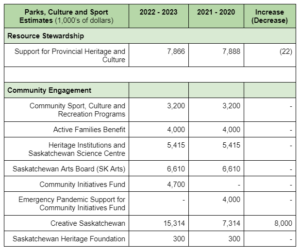 Investing in the Arts: Process over Production