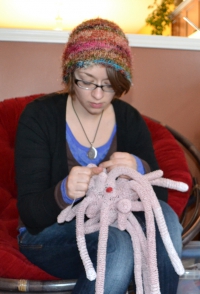 Twyla is a visual artist based in Prince Albert, Saskatchewan. She studied visual art in Regina and Montreal, graduating with a Bachelor of Fine Arts degree in sculpture from the University of Regina in 2004 and a Masters of Fine arts in studio arts from Concordia University in 2010. She has exhibited her artworks and given lectures and workshops in small and large galleries, universities, schools and community centers across Canada. Twyla currently works as the gallery educator for the Mann Art Gallery and serves on the board of directors for CARFAC Saskatchewan.

In the final year of my Bachelor of Fine Arts degree, my Professional Issues course instructor lectured on the hard reality of our not-so-distant future. Statistics showed that many of us wouldn’t continue to make art after graduation. The necessity of ‘making a living’ would eventually emerge and we would find ourselves working in administration, returning for an arts education degree or pursuing another ‘more employable’ field. As far as a serious contemporary art career was concerned, it was unlikely that more than half of us would persist. As depressing as it sounded, it was hardly a surprise. It is well advertised that pursuing a visual arts degree with the belief that it will lead to instant art stardom or a six-figure income is a long shot at best. I don’t regret my choice of studies, and nine years later I’m still working towards establishing careers as both an artist (an independent creator of wonderful things) and a cultural worker (an employee of a cultural institution who teaches, writes, administrates, and so on). While simultaneous art making and bill paying can be challenging, it is certainly not boring.

After graduation, I worked as a commercial prop maker and scenic painter. At first I thought it was a dream job because I was being paid to make things but it soon left me feeling empty and robbed of any desire to create art after hours. I quit, but not before sending out numerous applications for arts-related employment, art exhibitions, grants and graduate schools. I was fortunate to receive a few small exhibition opportunities and my first grant. I started working in the field as a gallery facilitator, art instructor, and children’s book illustrator. I soon learned the unfortunate reality of cultural work…that while it is exciting and fulfilling, it is often only so on a part-time or casual basis. Juggling several under-paying or contract jobs is the frustrating and often exhausting reality for many working artists and cultural workers.

Ten months later I quit everything and moved with my artist-partner who was beginning graduate school. Following a year of art making and some precarious employment, I began my own graduate studies. At the time I was optimistic that a Masters in Fine Arts would help me to eventually find employment within a University setting. I worked extensively as a teaching assistant in the hopes of obtaining the coveted teaching opportunity that six students are positioned to fight over in their final or thesis year. As life often surprises, my partner finished school and was offered a great opportunity in a small city. We moved again and I finished my thesis from a distance.

During the first year in my new home, a grant afforded me six months of full-time art making where I only had to work in a casual capacity, teaching community art courses and writing a weekly column for the local newspaper. I produced a new body of artwork and applied for many exhibitions during this period. While this lifestyle is what many artists hope for, I felt isolated, uninspired and without a peer group. As artists, we work hard for our opportunities, but we are afforded prospects through funding agencies, instructors, curators, directors and cultural workers as well as the general public. An upside to working in the arts is the feeling of accomplishment and connection to the profession and the network arts supporters, which in turn, is motivational.

It has been four years, two moves, five jobs, a few grants, exhibitions and projects since I completed my Masters degree and as time passes I have become more concerned about my financial future. It is often stated that artists starve; yet compensation for many cultural workers is not much better. While we fight fiercely for the fair payment of artists, little is done for cultural workers. My experiences have taught me that each position within an arts organization is dependent on the individual holding it. I have become uneasy balancing several jobs to make ends meet, and so I have spent the past year diversifying the revenue streams for my current employment position within a gallery through grants, sponsorships and self-generated funds as a means to improve the wage and hours of what was previously a part-time job that was in-demand in a larger capacity. I am of the opinion that greater financial responsibility for culture should be taken on by the municipal, provincial and federal governments. However this will only come about with advocacy from arts groups and by continually providing evidence that the arts are intrinsic to the well being of individuals, communities, and economies.

Many cultural workers are growing weary of quoting statistics and constantly fighting for the arts despite being told that they are not a priority, compared to the ‘more quantifiable’ needs of city infrastructure. Attending to all the issues we face as communities does not depend on the impoverishment of the arts. On the contrary, we can argue that the myriad of benefits the arts have on creating healthy communities make them all the more important. We witness and enable this every single day. Like all productive contributors to society, artists and cultural workers deserve job security, wages, funding, and respect.

Despite all of the challenges that a career in the arts brings, I can’t imagine working in a non-creative job.  Through my employment I am able to help artists’ to share their creations with the public. By facilitating projects and workshops I inspire a wide variety of individuals to love art too.  After all, we create art and have cultural institutions for the enjoyment and betterment of our communities.  I believe the best way to create relevance and cultural value is to provide people with the occasion to experience it for themselves.  As an artist and as a cultural worker, these opportunities are mine to share and are a rewarding way in which to work towards an improved status for the arts.