I moved to Kyoto from Regina to take care of my spiritual and psychological health while broadening my knowledge of Japanese culture and history. As someone who tries to make poems, I also wanted to expand the creative potential of my art. And to some extent it’s easy feel as though I’ve escaped myself: I can just walk up the street and stare into the eyes of the dragon painted on the ceiling of Bishamon-do, a Zen temple founded in 703 A.D., breathe in the incense, and listen to the intonations of the monks. Can’t get that back home, though the halogen lights and methane burn-off flames of the Co-Op oil refinery at the industrial edge of Regina can elicit a similar sense of the sublime. But is it a radical “otherness,” which can dangerously border on exoticism, that I feel, or is it something else?

Gods and spirits exist both completely within and completely beyond us. It’s the cult of empiricism that creates and requires binary logic of HERE and THERE. Of course, in a world where both truths and lies are wielded as deadly weapons, one in which “fake news” is used as a rallying cry and dog whistle, it’s dangerous to say truth is subjective and showcase the value of turning inward.  When we enter the realms of politics and historical injustice we can and should demand acknowledgement of the very real horrors committed in the name of colonialism and capital, forces that are a corruption of the mind’s imaginative potential or a complete lack of it. However, I’ve come to believe that recognizing the limitlessness of the imagination and performing acts of creation are ways we can push back against these narrowing, destructive forces.

For we inhabit an architecture of the imagination. These temples and shrines, like other sites of worship and magic, are artifices that symbolically represent this fact. They’re metaphors that we can actually enter into and experience. And art, not doctrine, is where I’ve found the gods and spirits I’ve been looking for all my life. They were our earliest creations, our first art, and they’re HERE, wherever here happens to be. But why go looking for them? Perhaps you’ve experienced the gods as forces that shape your life as much as the weather, but their symbolic, metaphorical forms—image and / or word—activates their power in us and may even help us become more psychologically whole by, as Joseph Campbell says, “reflecting” both the positive and negative aspects of ourselves back at us. As we stare into the eyes of monsters, we confront the darker sides of ourselves, and perhaps even integrate them into our psyches. Learn to accept them. Carl Jung, who Campbell owes much to, calls this process towards a fuller realization of the Self through mythological archetypes “individuation.” This is a dynamic, lifelong process, but part of it encompasses the way in which what the individual and collective imagination manifests helps us to more fully realize who we are. Encounters with sites of profound imaginative, transformational power, and not fleeting encounters with exotic, is one of the benefits of experiencing different cultures.

Art starts when we turn a thing inside of us into another thing. Turn it over and see its belly. Make it sing. That master poet of permeability, Rilke, has a word for where we really feel the heat of the ineffable, that part of our self where the laws of physics collapse and the imagination rings out from: weltinnenraum, or “world/inner/space.” That seems about right. Dreams are reality. Art, which attempts to make this space tangible, is reality. In his poem “By Night with Torch and Spear,” Timothy Donnelly observes flare stack, much like the one in Regina, in New Jersey’s industrial district shooting out an “invisible current / of methane produced by the oil’s distillation // process like a monster, the nonstop spasm of it / lumbering upwards into the dark.” Donnelly’s made a connection between the refinery’s flame to a dragon-like “monster,” bridging myth and the material world in a way that feels utterly true. The dragon and the oil refinery both shoot flames into us—maybe it’s the same flame. Perhaps the connection feels right because reminds us one some level of the connection between all things: it just takes an act of imagination to bridge them in our conscious minds. Enacting this oneness, as poet Randy Lundy suggested to me in a recent email exchange, is what metaphor DOES. And metaphor, whether suggested by language, images, or forms, is where poetry begins.

Wherever I am, as an artist, I want to be able to encounter the gods, to live in permeability and paradox, to dissolve the line between here and there. I want to embody Keats’s “negative capability,” which is to be “capable of being in uncertainties, mysteries, doubt, without any irritable reaching after fact and reason.” The painted dragon, which burst out of the imagination to reside in the temple, resonates with fundamental aspects of my psyche while gesturing towards the UNKNOWING that is central to creating art. I don’t think I’ll ever write a poem about the dragon of Bishamon-do, but it has expanded the creative potential of my world—perhaps enough to let something new in. 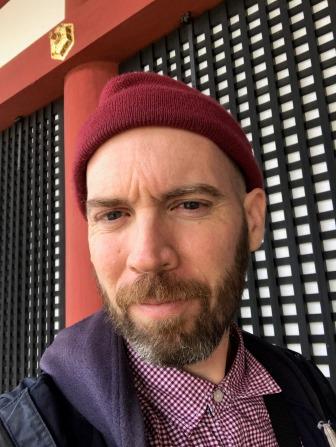 Nathan Mader was born in Regina, Saskatchewan and lives in Kyoto, Japan. His poems have appeared in The Best Canadian Poetry 2018, Vallum, Prism: international, The Fiddlehead, Grain, The Puritan, and The New Quarterly. He was a finalist for the Walrus Poetry Prize.