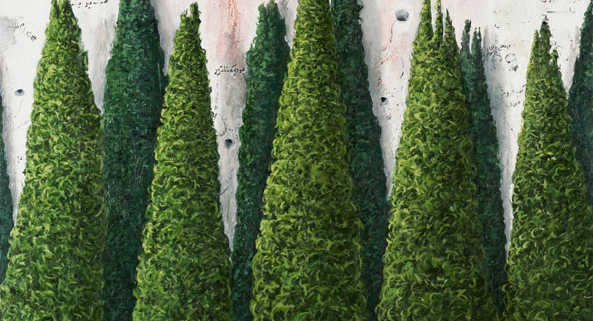 Hybrid Identity: Toward an Unknown

On a cold evening in mid-February on the streets of Regina, a memory of Persian gardens came flooding back to me as I was walking on snow and trying to stay upright to avoid slipping or falling. Surrounded by the silence of snowfall, I heard the sound of water running down the pond and splashing out of the fountain. For a moment, I was transported back to the Shazdeh Garden in the heart of Lute desert near my father’s land, feeling the warm breeze of summer on my face. This was my first time experiencing a detachment from my surroundings and losing myself between two different worlds.

Living in Iran for nearly three decades and dealing with many struggles as an Iranian-born woman, I had to look forward to escape the past and present. Besides education, the other reason that made me decide to leave my homeland was to run away from the darkness caused by a political system that is governed based on the religious laws and values articulated 15 centuries ago. The darkness that I was surrounded in through living in a theocratic society made me go deep inside myself as a way to escape the harsh reality of my outside world and explore my inner self through art.

I received my Bachelor of Painting in 2011 in Tehran and started to work as a visual artist by focusing on my studio practice. I rented a small space with a fellow artist in one of the busiest neighbourhoods in Tehran to dive deep into my forced/self-imposed isolation. Avoiding the oppressive society, cultural contradictions and difficulties of being an artist, the studio became like a shelter and a space to confront myself and discover the hidden aspects of my psyche and feelings that have been lurking in my subconscious. Crawling deep into the world of imagination, in my works made between 2010 and 2017, I attempted to explore the existential aspects of self and reality. I was interested in mingling the world of reality and illusion by defamiliarizing familiar places and elements through creating unconventional and surreal situations. Before displacement, art for me was a possibility to detach from surrounding reality and reimagine myself in a different kind of reality. 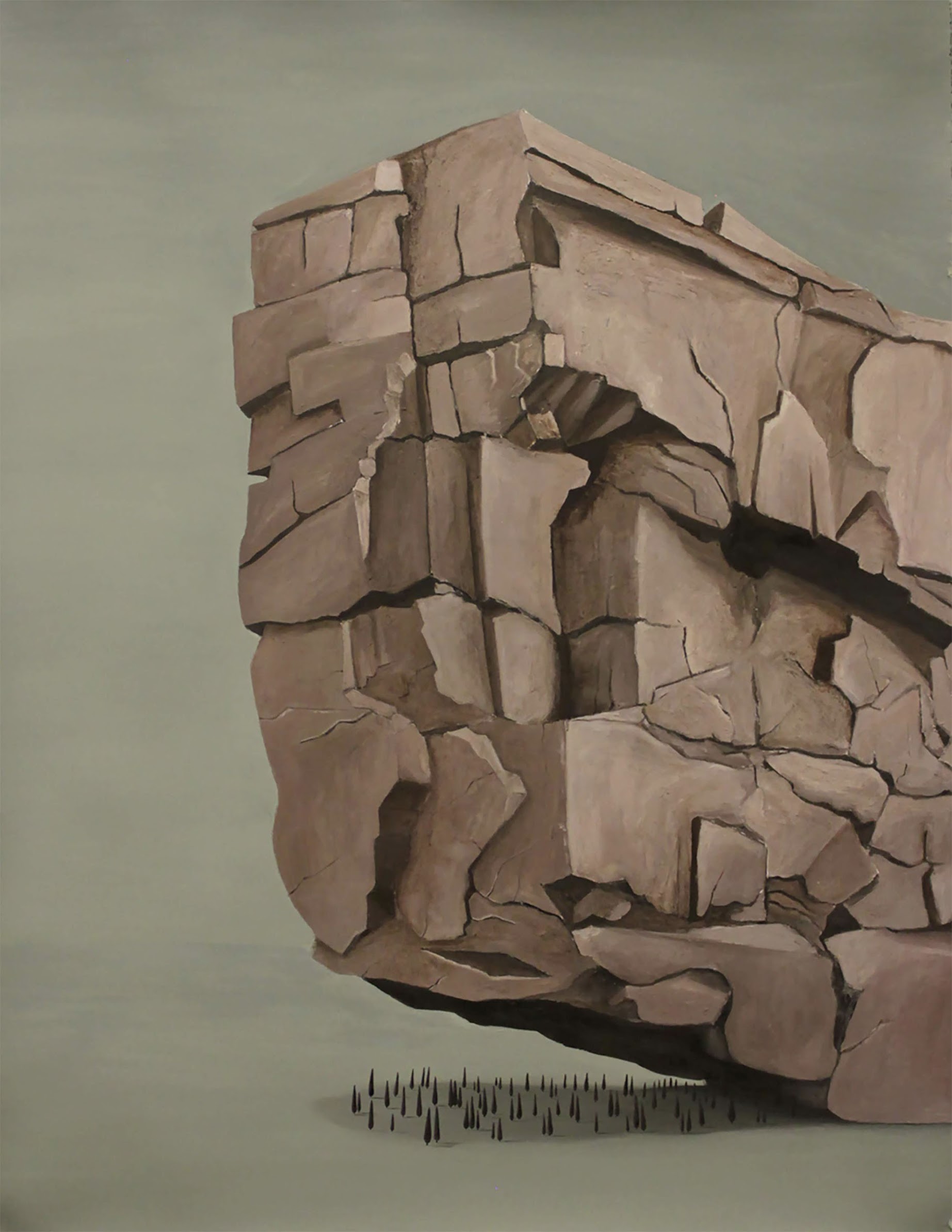 Taking the risk of facing the uncertainty and ambiguity of my future life, I moved to Canada in 2017 to pursue my Master of Fine Arts Degree (MFA) in a new country. After a 24-hour flight I found myself in a completely different world and home felt infinitely distant. The first few days passed like I was walking in vacuity which led to coming to accept the reality in which my family, friends, land and language were not part of anymore.

Continuing to explore my psychological narratives, my fears became the subject matter of my paintings and drawings in the first year of the MFA program at the University of Regina. Depicting nude female bodies in empty and subdued landscape scenes, these works were narrating my psychological state of the time and represented my unsettling thoughts; cold, vulnerable, left alone and lost in the middle of an unfamiliar world.

The extremely cold weather in Saskatchewan in my first Canadian winter along with the experience of geographical displacement revived my memories of Persian gardens as thinking about their beauty helped me to cope with the  harsh weather of my surroundings. It was in my first winter in Canada and the second semester of my MFA program that the images of Persian gardens emerged in my paintings as part of the background. I started researching Persian gardens, their functional and symbolic meaning, and their existential role in my personal memories.

The images of Persian gardens acted as a bridge to my memories, identity, culture, land and my lived experiences of being an Iranian citizen. Iranian gardens as  spaces embedded in the aesthetic context of Iranian identity play a significant role in representing the culture. At this stage of my art practice, I started borrowing elements from Persian gardens and redefining their pattern and aesthetic through displacing and transposing the elements of ponds and the cypress tree. 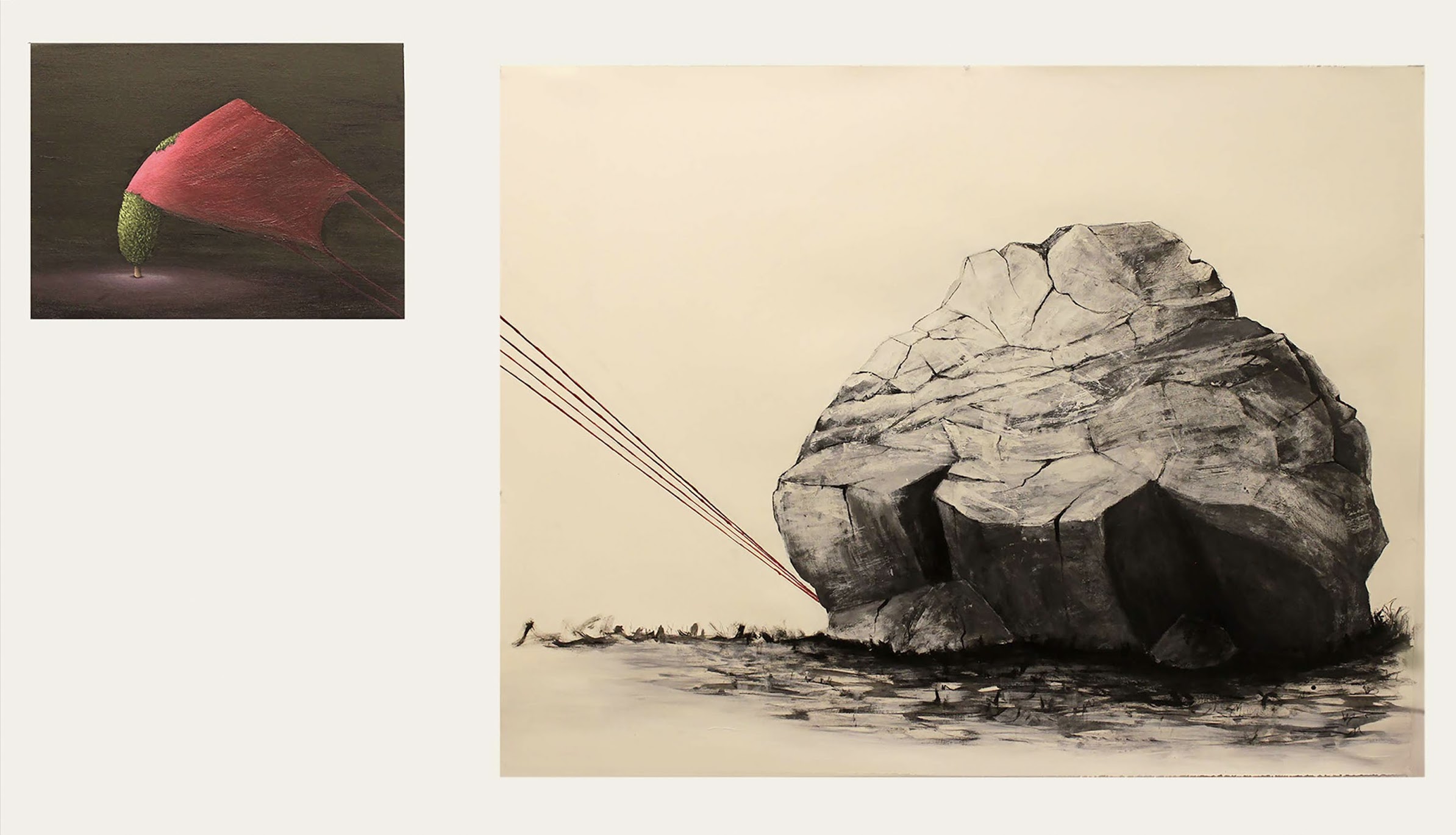 Going back to the roots and digging deep memories and culture, I realized how valuable it is to explore myself in relation to my cultural identity and how far I have to go to preserve it, which led me to look into the reality that prevents Iranians from moving forward. The tumults that have been repeatedly roiling Iran and the defective cycle of political and social events indicate that the historical issues throughout Iran’s history are rarely solved and carried across generations like a genetic disease. Decades of an autocratic system of government in Iran after the  Islamic revolution of 1979 turned Iran into an isolated country where usual relationships and connections with the outside world are extensively eradicated. Living in such an isolated country makes individuals not to recognize  their individuality, their rights, strengths, weaknesses, hopes and dreams, since self cognition is possible only through communication with others. Living in Canada and getting familiar with the democratic system of government as well as being in contact with other cultures helped me to have a better understanding of my rights first as a human and second as a woman. The disjunction between me and my home country along with my experience of living in Canada brought about a new way of looking at my country and its socio-political issues.  At that point, I started studying Iran’s political history and reviewed the major contemporary political and social events.

My appreciation for landscape painting and Persian gardens along with my interest in exploring psychological dimensions led me to create metaphorical situations that examine the psychosocial impact of life in an oppressive environment. In my MFA thesis project, completed in 2019, I used the image of Cypress tree as a mythological signifier juxtaposed with other elements of landscape such as pond, water and rocks to represent the narratives of human condition under political oppression.

Moving to Canada has been one of the most significant changes in my life; learning about colonialism and Indigenous resistance through studying at the University of Regina and MAP department have deepened my theoretical perspective on the psychology of power and expanded my methodological approach. Being far from home has given me the opportunity to create a new way of working and rethink my place in a broader context and in relation to other cultures and nations. 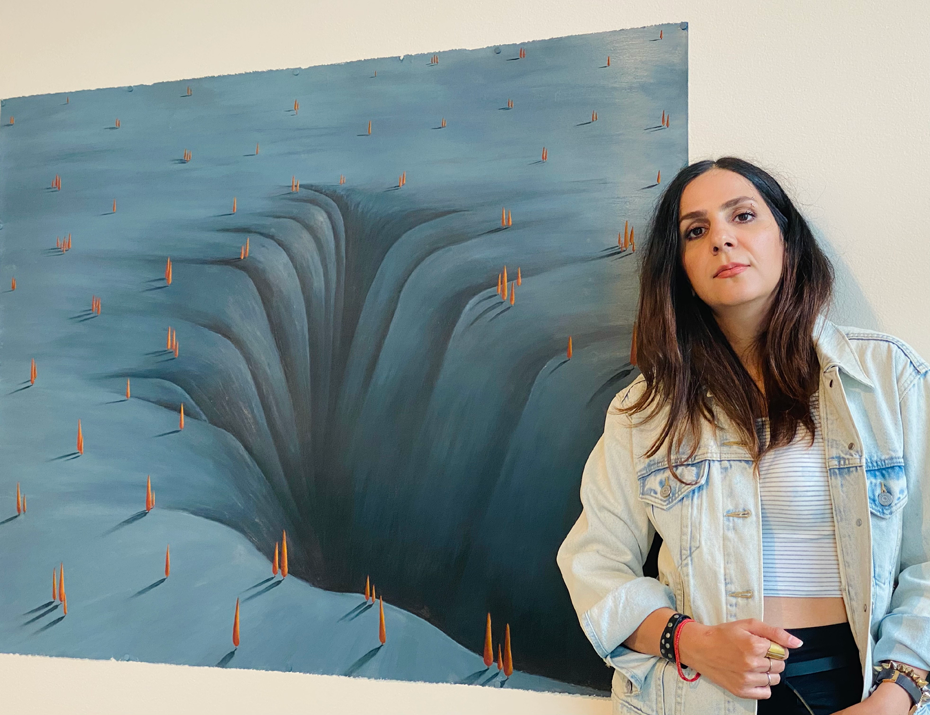 Born in Tehran, Iran, Mohadese Movahed is a visual artist whose studio practice focuses on painting, drawing and intaglio printmaking. She graduated with a Bachelor of painting degree from the University of Science and Culture in Tehran and a Master of Fine Arts Degree from the University of Regina, SK, Canada in 2019. Movahed has exhibited her work nationally and internationally and currently lives and works in Vancouver, Canada.

Using the power of visual rhetoric, she borrows elements from her memories, culture and current surrounding to transform sociopolitical narratives to allegorical imagery. Shaping a semiotic system through creating uncanny landscape scenes, In her work, Movahed attempts to explore the psychology of power and the psychosocial impacts of life in oppressive environments on individual and collective behavior.  The heterogenous and contradictory juxtapositions in her paintings attempt to provide new visual experiences while investigating the multidimensionality and complexities of power dialectics in totalitarian societies.

Pajama Party Politics: There is no justice without access

Death of the Artist
Scroll to top